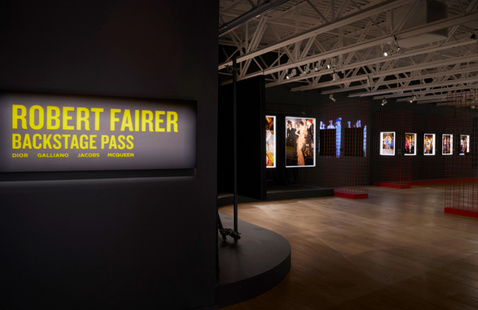 Enjoy an intimate look at our new exhibitions at this curator-led, members-only tour.

Through an exhibition of Robert Fairer’s photography, SCAD FASH director of fashion exhibitions Rafael Gomes gives a behind-the-scenes tour of some of fashion history's greatest runway moments in Robert Fairer Backstage Pass: Dior, Galliano, Jacobs, and McQueen. Fairer’s intimate portraits of supermodels, designers, and creatives capture the zeitgeist of fashion at the turn of the 21st-century. The exhibition then invites guests to look to the future of fashion with Robert Wun: Between Reality and Fantasy and discover the bold work of the emerging fashion designer. A rising star in the fashion world, Wun has dressed fashion mavens Billy Porter, Solange Knowles, Lady Gaga, Céline Dion, Issa Rae, and Tessa Thompson.

This tour is open to SCAD FASH members only. Become a member today.

Before instantaneous access to fashion shows via livestreaming and social media, London-based artist Robert Fairer was backstage photographing the designers, models, hair and makeup artists, stylists, and others working in crowded spaces at a frenetic pace moments before the final looks were presented. His intuitive ability to frame the beauty, drama, and energy backstage resulted in stunning images — found in the pages of British Elle, Harper’s Bazaar, and eventually American Vogue — that celebrate the creative talents who contribute to the magic of the runway.

A captivating record of a bygone era, the exhibition features behind-the-scenes photographs from the house of Dior, John Galliano, Marc Jacobs, and Alexander McQueen.

Robert Wun: Between Reality and Fantasy

Robert Wun favors a narrative approach to fashion design, embracing a global perspective that honors his heritage yet refuses preconceived notions of Asian identity. He often looks to nature to inform his work, relating the asymmetry of organic forms to the complexity of being human. Energized by the potential of design to function as a universal language, Wun translates bold conceptual ideas into technically rigorous yet accessible garments that empower the wearer.