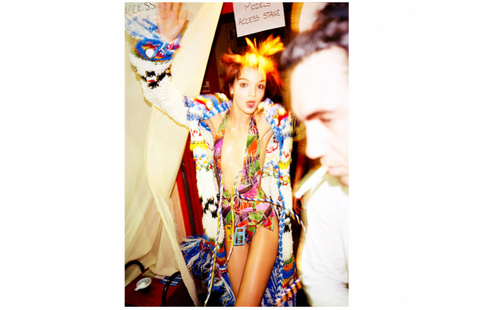 Join London-based artist Robert Fairer for a gallery talk and first look at his new exhibition, Backstage Pass: Dior, Galliano, Jacobs, and McQueen, at SCAD FASH Museum of Fashion + Film in Atlanta. The exhibition captures the zeitgeist of the turn of the 21st-century, an era of artistic zenith in runway show production.

Before instantaneous access to fashion shows via livestreaming and social media, Fairer was backstage photographing the designers, models, hair and makeup artists, stylists, and others working in crowded spaces at a frenetic pace moments before the final looks were presented. His intuitive ability to frame the beauty, drama, and energy backstage resulted in stunning images — found in the pages of British Elle, Harper’s Bazaar, and eventually American Vogue — that celebrate the creative talents who contribute to the magic of the runway. In the early 2000s, Fairer was commissioned by Vogue to cover the international fashion scene. For more than a decade, he collaborated with editors Sally Singer, Hamish Bowles, André Leon Talley, Sarah Mower, and editor-in-chief Anna Wintour to capture defining moments in fashion history.

To learn more about the exhibition, visit scadfash.org.

This free online event is presented in association with Atlanta Celebrates Photography.