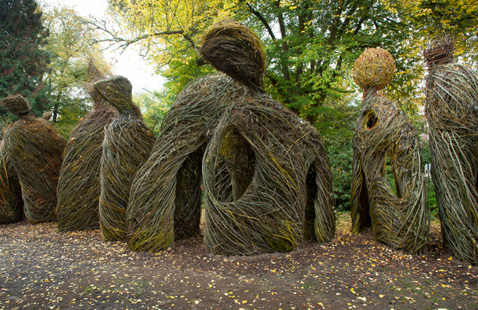 Join artist Patrick Dougherty and SCAD Museum of Art curator DJ Hellerman in the museum’s Alex Townsend Memorial Courtyard for a conversation on Dougherty’s practice, his interest in environmental art, and how he started making large-scale sculptures.

About the artist
Born in Oklahoma in 1945, Patrick Dougherty was raised in North Carolina. He earned a B.A. in English from the University of North Carolina in 1967 and an M.A. in hospital and health administration from the University of Iowa in 1969. Later, he returned to the University of North Carolina to study art history and sculpture. Early in his career, Dougherty began to learn vernacular techniques of building and to experiment with tree saplings as construction material. In 1982, his first work, Maple Body Wrap, was included in the North Carolina Biennial Artists’ Exhibition, sponsored by the North Carolina Museum of Art. The following year, he presented his first solo exhibition, Waitin’ It Out in Maple, at the Southeastern Center for Contemporary Art in Winston-Salem, N.C. Dougherty’s work quickly evolved from single pieces on conventional pedestals to monumental-scale environmental works, requiring saplings by the truckloads. Across 30-some years, he has built more than 300 sculptures, exhibiting worldwide to international acclaim. Dougherty is the recipient of numerous awards, including the 2011 Factor Prize for Southern Art, North Carolina Artist Fellowship Award, Pollock-Krasner Foundation Grant, Henry Moore Foundation Fellowship, Japan-U.S. Creative Arts Fellowship, and National Endowment for the Arts Fellowship. Princeton Architectural Press published a major catalogue on Dougherty and his work in 2009.

This event and exhibition are free for museum members and SCAD Card holders, and open to the public with the cost of museum admission.