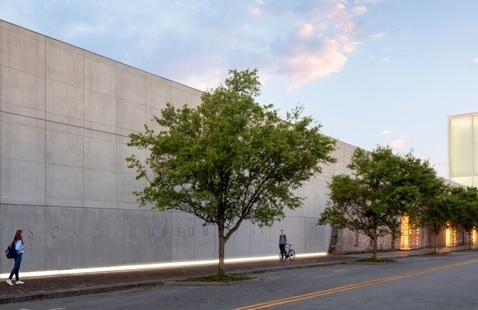 Artists Izumi Kato and Arturo Soto (B.F.A., film and television, 2005) delve into the processes behind their recently opened solo exhibitions at SCAD Museum of Art. Hosts and SCAD Museum of Art curators Humberto Moro and Ben Tollefson lead the virtual conversation into the artists' distinct and varied approaches. Kato offers insight into his enigmatic paintings and sculptures of otherworldly figures in Stand By You, and Soto illustrates how his photographs speak to the cultural specifics of the sites he has documented in Urban Visions.

About Izumi Kato
Izumi Kato (b. 1969, Shimane, Japan) has exhibited internationally, including solo exhibitions at Red Brick Art Museum, Beijing (2020, 2018); Fundación Casa Wabi, Puerto Escondido, Mexico (2019); Hara Museum, Tokyo and Gunma, Japan (2019); Kirishima Open-Air Museum, Kagoshima, Japan (2012); and The Ueno Royal Museum Gallery, Tokyo (2008), among others. Public art projects include Tai Kwun – Centre for Heritage and Arts, Hong Kong, (2018-2021). His work is held in the collections of the prominent museums in Japan including Museum of Contemporary Art Tokyo; the National Museum of Modern Art, Tokyo; the National Museum of Art, Osaka; and the 21st Century Museum of Contemporary Art, Kanazawa. In 2007, he took part in the 52nd Venice Biennale International Exhibition, curated by Robert Storr. Kato is represented by Perrotin and has had exhibitions at gallery locations in Paris, New York, Seoul, Hong Kong, Tokyo, and Shanghai. He graduated from the Department of Oil Painting at Musashino Art University in 1992. Kato lives in both Tokyo and Hong Kong.

About Arturo Soto
Arturo Soto (b. 1981, Ciudad Juárez, Mexico) holds a Ph.D. in fine art from the University of Oxford, an M.F.A. in photography from the School of Visual Arts in New York, an M.A. in art history from University College London, and a B.F.A. in film and television from SCAD. Soto curated the exhibition Foreign Correspondence at the Architectural Association in London and participated in the first edition of Forecast Platform at the Haus der Kulturen der Welt in Berlin. His work has been exhibited internationally and featured in Granta, ASX, Paper Journal, Phases, Punto de Fuga, Formagramma, Places Journal, PhotoBook Journal, and FotoRoom, among others. His work has also been included in the books Primal Sight, Imaginaria, and the Subjective Atlas of Mexico. Soto reviews art books on Latin America for ASX and collaborates with the collective Image Threads on its mentorship program.

This gallery talk is free and open to the public. The exhibition is free for museum members and SCAD students, faculty, and staff with a valid SCAD Card. Open to the public with the cost of museum admission.